Ok folks - if you've been downtown lately near the Mission Inn, you've probably seen that new abomination referred to as the Eliza Tibbets statue.  No one I've spoken to is happy with it, and everyone has an opinion of what it really looks like (certainly not Eliza herself).  So, I'm going to start a list of all of the (printable) ideas that I've heard regarding the statue.  Do you have others?  Please let me know!

Pomona (the Roman goddess of fruit, not the town!)
The hood ornament of a Rolls-Royce
Butterfly McQueen (one of the slave girls in "Gone With The Wind")
Evita Peron (the leader of Argentina about whom the musical "Evita" was written)
Barbie

I'm sure there are others.  What is universal is that the statue isn't Eliza Tibbets.  Too bad - they could have done so much.  Of course, the artist and the people behind the statue say that they chose a younger Eliza to portray because people would rather have themselves immortalized as they were when they were younger, not older.  There are 2 problems with that reasoning.  One, the statue looks nothing like the younger Eliza Tibbets shown in a picture in the new book Creating an Orange Utopia by Patricia Ortlieb and Peter Economy (at a book signing on October 22 at Riverside's Barnes and Noble, Ortlieb indicated that that picture was used by the artist to make the rendition).  Second, since she is being immortalized as the founder of the orange industry here in Riverside, and she was about 50 years old when she came to Riverside, her likeness should have been in accordance with her time here.  She looked very much like Queen Victoria, and prided herself in that likeness.  So, we now have an expensive statue that took years to develop and raise funds for, that further degrades the history of this area.  I'm actually not too surprised, given the City's all-but-declared war on our history and historic structures.  It shouldn't be too much of a shock that we'd get a poor excuse for a statue of one of Riverside's most important residents.

Just when we thought that the Arcadia Publishing series of books was about done in our area, along come 3 more soon-to-be written or released books that should be added to the bookshelf:

The Navy in Norco, by Kevin Bash.  Kevin is the champion of the Norconian Resort.  His newest (he already has one on the Norconian itself) will focus on the Navy's years of ownership starting just at the brink of US involvement in World War 2.  It's the book that will be out the soonest - September 1.

Old Town Temecula, by Rebecca Farnbach.  Rebecca and her cohorts have authored several Arcadia books in the southwest part of the County, including Temecula and Murrieta Hot Springs.  Now, she is focusing on just Old Town Temecula (which, of course, for most of its life was called New Temecula).  She's still putting it together, but look for it in the coming months.

Finally, Corona historian Mary Winn is in the negotiating stage of developing a new book entitled Corona Then and Now, based on a lecture she gave to the Corona Historical Preservation Society a few weeks back.  Mary and her husband Richard have researched and re-photographed several postcard and photographic images and will show the two side-by-side in the upcoming book.  I'd say this one will be out after the first of the year.

And so there you have it - a few more books for the bookshelf!
Posted by Rivcokid at 5:49 AM No comments:

The book is 150 pages, with lots of photos, both historic and new (including pics of those for whom the parks are named), Right now, it's available through me for $20.  I'm hoping to have it at the parks and in museums throughout the county over the next few months.  If interested, let me know !!
Posted by Rivcokid at 5:35 AM No comments:

I see that today (December 26), the Press-Enterprise has run yet another piece on the impending doom of the San Gorgonion Inn.  That is truly a shame that didn't have to happen.  The San Gorgonio Pass Historical Society and the Old Riverside Foundation both appealed to City Council to help them find a suitable use for the building.  That failed - it seemed as though the City was bound and determined to tear it down no matter what.  Then, those groups told them that it was a structure of merit under CEQA, and that an EIR would have to be done.   The City hired a firm to do it, and the resulting EIR was laughable.  It was probably the most biased one I'd ever seen, and since I worked in the Planning Department during the 80s and early 90s, when the building boom was on, that's saying a lot.  During all this time, the City has made no effort to shore up the building's upper floor, so that vandals and other bums can get inside of it and destroy it.  People in the preservation circles call this "Demolition through Neglect."  Now, of course, they say it's in bad shape and an eyesore - of course it is!  You've made it that way!  The City is fully responsible for making it such and eyesore!  If they had any creativity whatsoever, they'd be finding a reuse for the building instead of going about, starry-eyed, beholden to some other out-of-town developer who's going to promise them the moon and deliver something far less.  Yes, the City of Banning has really screwed up this one - thank goodness they didn't get ahold of the Hotel Banning a couple of blocks to the west.  That would be destined for the wrecking ball too, undoubtedly!!
Posted by Rivcokid at 6:09 AM 1 comment:

The Hermit of Palm Springs

This is William "Billy" Pester - better known as the Hermit of Palm Springs.  He came from Germany wanting to avoid military service and ended up in Palm Springs.  Here, he adopted a "naturalist" way of life, living off the land and typically wearing few if any clothes.  Several sites have called him the first of the true California hippies, despite his living in PS from 1906 to the 1930s.  The Hermit's Bench is named for him - his little hut was located where the gift store/visitor center is presently in Palm Canyon south of town. 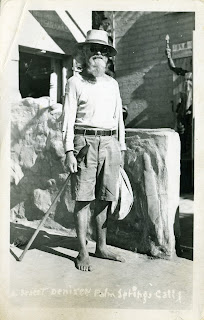 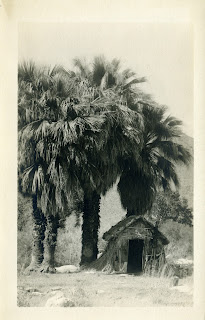 Posted by Rivcokid at 5:45 AM No comments:

After my previous rant about the Cities of Banning and Indian Wells, one bright spot should be mentioned.  In 2010, the restored Fox Theater was reopened in Riverside, and just recently the reconstructed blade signs went up on the sides.  These blade signs were on the building until probably the early 1940s - so very few people around today remember when they were up.  From all indications, the theater is a success.  Let's hope it keeps going!
Posted by Rivcokid at 2:22 PM 2 comments:

2010 - Not a good year for preservation in the County

Alas - 2010 saw the approval of plans to demolish two landmarks within Riverside County.  The first was the San Gorgonio Inn in Banning, long a landmark in a city with so few remaining landmarks thanks to the continuing myopic foresight of the City Council.  Wanting to replace it with a mixed-use development, the Council ordered that an environmental impact report be written, probably only because the San Gorgonio Pass Historical Society and the Old Riverside Foundation deemed the structure of merit under CEQA and they couldn't get out of it.  What resulted was the most biased and unobjective example of an EIR that I've ever seen.  The City opted to purchase the Inn in 2008, then boarded the first floor up and left the second floor open to bums and other transients.  Then, Mayor Bob Botts tells the Press-Enterprise that it's an eyesore - a self-fulfilling prophesy if I've ever heard one!  Regardless, the Council will get its wish in January when the Inn comes down, to be replaced (probably in 10 years in this economy) by a bland, architecturally devoid building with a stupid name that will "honor" the old Inn.  Congratulations City of Banning - you're becoming like all other cities with little to define yourself!
The second tragedy is the demolition of the Carl Bray house in Indian Wells.  Bray, a well-known artist there, had a landmark house and mid-century modern studio right on Highway 111.  Unfortunately, that was not enough to save it despite pleas from the community, and the Council voted to tear the buildings down in the name of "progress."  Congratulations IW!  You've removed probably the only older landmark that people outside of the city may know you for!
Posted by Rivcokid at 2:19 PM 1 comment: